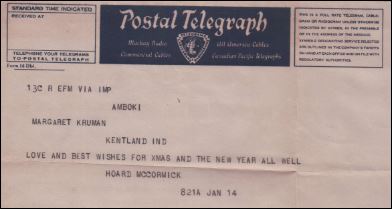 Howard was transferred to New Guinea in January 1943. Major fighting along the Kokoda trail between the Japanese and the Australian and American troops had consumed much of the second half of 1942. At the beginning of 1943, Japan still intended to invade Port Moresby from Lae. Lt. Gen. George C. Kenney, using intercepted information, prevented Japan from building up its forces at Lae, thereby successfully forcing Japan on the defensive. The first half of 1943 saw a stalemate between the opposing forces. Neither Japan nor the United States were able to bring sufficient resources to bear to change the dynamic. The war of attrition continued throughout 1943. (Edward J. Drea, New Guinea: The U.S. Army Campaign of World War II 5). 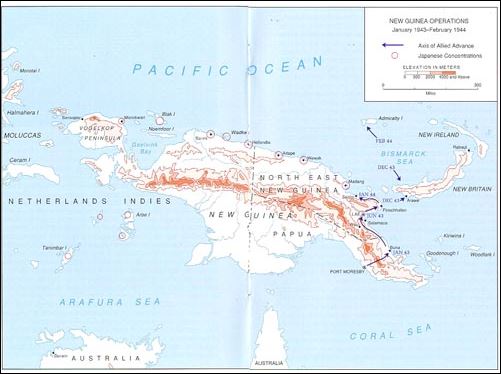 His first letter from New Guinea, undated and postmarked January 26, 1943, uses APO 929 (Port Moresby). Flights took off at all hours and planes were in constant need of repair, so there would have been much noise. 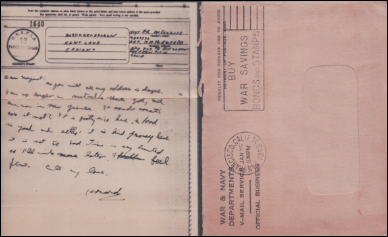 As you will see my address is changed.  I am no longer in Australia, thank God, and am now in New Guinea. It sounds exotic does it not? It is pretty nice here, the food is good and although it is kind of noisy here it is not so bad. Time is very limited so I'll write more later. I feel fine. All my love,
Howard

Port Moresby has two seasons: monsoon and dry. Howard arrived in the wet season when it rains about every other day, with an accumulation of about 6 inches on average in February. Plants and vines grow quickly in the wet season and mosquitoes are plentiful. 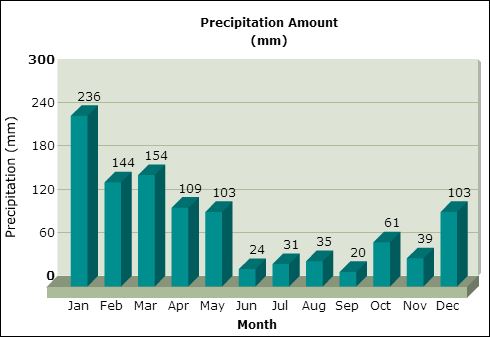 His next letter, dated January 19, 1943, and postmarked February 4, has more detail and indicates that he was already in New Guinea by the 19th. 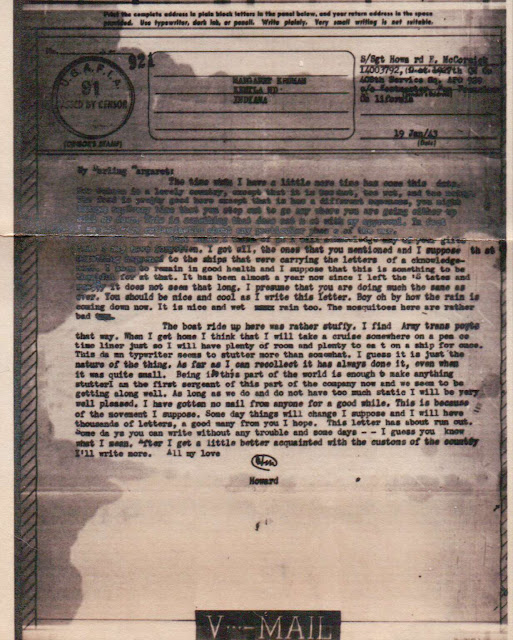 My Darling Margaret,
The time when I have a little more time has come this date. New Guinea is a lovely country, except that it is too dark, too wet, and too [unclear]. The food is pretty good here although that is but a different [unclear], you might [unclear] that you step and to go any where you are going either up [unclear]. I got all, the ones that you mentioned and I suppose that something happened to the ships that were carrying the letters of acknowledgement. I [unclear] remain in good health and I suppose that this is something to be thankful for at that. It has been almost a year now since I left the 'States and [unclear] it does not seem that long. I presume that you are doing much the same as ever. You should be nice and cool as I write this letter. Boy oh boy how the rain is coming down now. It is nice and wet rain too. The mosquitoes here are rather bad [unclear].
The boat ride up here was rather stuffy. I find Army transports that way. When I get home I think that I will take a cruise somewhere on a peace time liner just so I will have plenty of room and plenty to eat on a ship for once. This damn typewriter seems to stutter more than somewhat. I guess it is just the nature of the thing. As far as I can recollect it has always done it, even when it was quite small. Being in this part of the world is enough to make anything stutter. I am the first sergeant of this part of the company now and we seem to be getting along well. As long as we do and do not have too much static I will be very well pleased. I have gotten no mail from anyone for a good while. This is because of the movement I suppose. Some day things will change I suppose and I will have thousands of letters, a good many from you I hope. This letter has about run out. Some days you can write without any trouble and some days -- I guess you know what I mean. After I get a little better acquainted with the customs of the country I'll write more.  All my love