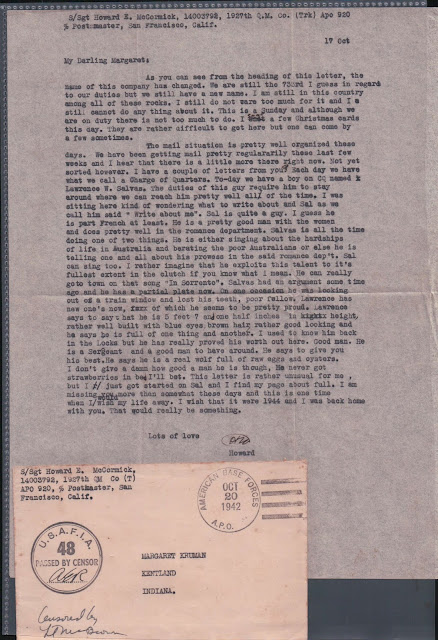 His October 17th letter to Margaret describes a Sgt. Lawrence W. Salvas, likely this man.  If so, he survived the war and was discharged in 1945.

On the same day, Howard mailed a Christmas card to Margaret, which she received in early November. 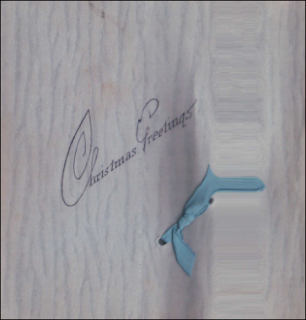 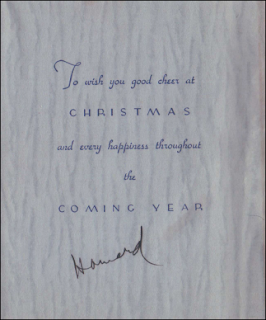 By October 26, 1942, when he wrote this letter, Howard was acting as first sergeant for a detachment of the company.  His sister Ruth was two years older.  When Ruth died years later, Howard, Margaret, my sister, Nancy, and I cleaned out her house in Melbourne.  As I went through her closet, I kept finding little envelopes with small amounts of money in them.  Howard said they were from her winnings at the dogs. 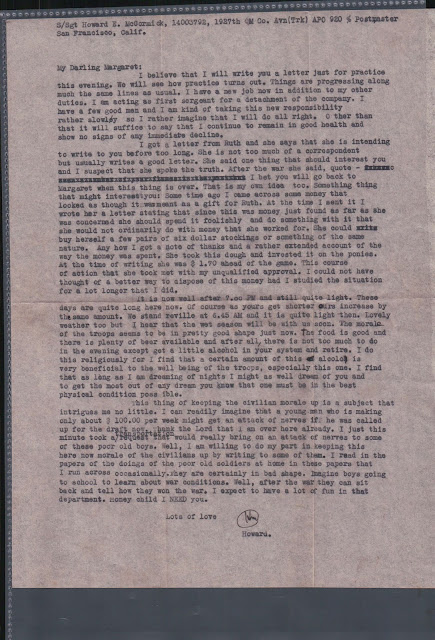 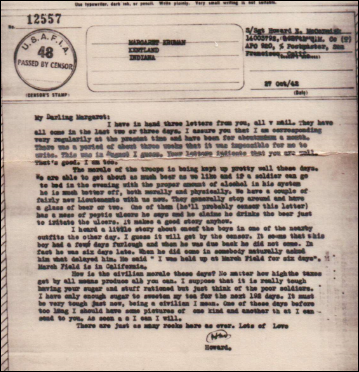 I have in hand three letters from you all V mail. They have all come in the last two or three days. I assure you that I am corresponding very regularly at the present time and have been for about a month. There was a period of about three weeks that it was impossible for me to write. This was in August I guess. Your letters indicate that you are well. That's good. I am too.
The morale of the troops is being kept up pretty well these days. We are able to get about as much beer as we like and if a soldier can go to bed in the evening with the proper amount of alcohol in his system he is much better off, both morally and physically. We have a couple of fairly new Lieutenants with us now. They generally stop around and have a glass of beer or two. One of them (he'll probably censor this letter) has a mess of peptic ulcers he says and he claims he drinks the beer just to irritate the ulcers.  It makes a good story anyhow.
I heard a little story about one of the boys in one of the nearby outfits the other day. I guess it will get by the censor. It seems that this boy had a four days furlough and when he was due back he did not come. In fact he was six days late. He said "I was held up at March Field for six days." March Field is in California.
How is the civilian morale these days? No matter how high the taxes get by all means produce all you can. I suppose that is really tough having your sugar and stuff rationed but just think of the poor soldiers. I have only enough sugar to sweeten my tea for the next 198 days. It must be very tough just now, being a civilian I mean. One of these days before too long I should have some pictures of one kind and another that I can send to you. As soon as I can I will.
There are just as many rocks here as ever. Lots of Love

He wrote another letter the following day: As I said a few days ago when I wrote you that note I shall sit me down now and attempt to write a more complete letter. The days have gotten pretty long here now. We get up at 6:30 and it is light then. It is now 6:15 PM and there is still a lot of daylight left. I have gotten a couple of letters from you in the meantime and I also got my birthday package from you. It was really nice. All these things I can use. So many things that are sent to the boys cannot be used conveniently. Cigarettes and toilet articles and things of that nature always come in handy.
I mentioned in my last note I believe that I was in a new section of Australia. This part of the country is not too bad, but not too good either. There are a few white people about and a lot of milk and eggs. Some fresh fruit too. We do not have any lights as yet however, but that condition will soon be remedied. This damn country has more rocks per square mile than any place. I think that all the soil has blown into the ocean or somewhere and the pebbles is what I trip over.
Maby I mentioned before that there are an awful lot of ant hills in this country. In some sections of the country where I have been these hills get to be 18 or 19 feet high and very artistically (sp?) constructed. One place there were what they called magnetic ant hills. The were in colonys and all pointed north and south. Most ant hills are roughly round in shape with kind of fine emery so often from top to bottom. Those magnetic hills are sort of elongated. What I am getting at is that those ants here do not show any constructive ability. The hills here are not much to look at. They resemble a load of dirt dumped on the ground. My artistic nature rebels but what can I do. I have not found any way to influence the ants. They probably would not do anything for a Yank any how.
I understand there are a lot of soldiers in the States that want to get a little of this foreign service. The poor old boys. They just don't know when they are well off. I was reading a piece in the Reader's Digest the other day and I came across a note dealing with civilian moral. The general idea seemed to be that what with rationing of one kind and another the folks at home were having a pretty tough time and the soldiers should write home oftener so that the home folks would have something to look forward to. You are what I look forward to my dear.  All my love,

Magnetic ant hills are found in the Northern Territory: 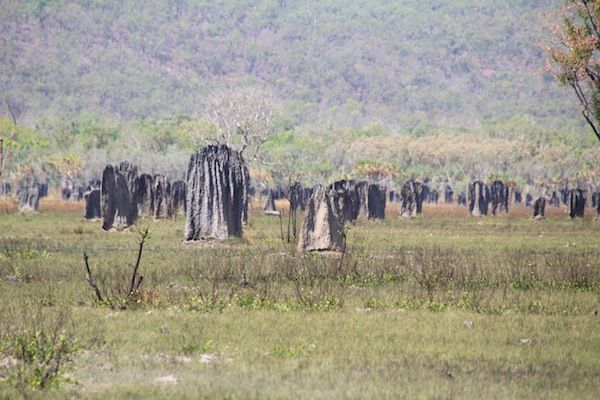 A discussion of the geology of Northern Australia can be found here.  At the beginning of World War II, the entire population of the Territory was about 2000, most of whom lived in Darwin.
Posted by Mary at 9:29 PM