It is not surprising that there was some interruption of correspondence as the United States began what became a two and one-half year battle for control of New Guinea and other parts of the Pacific. 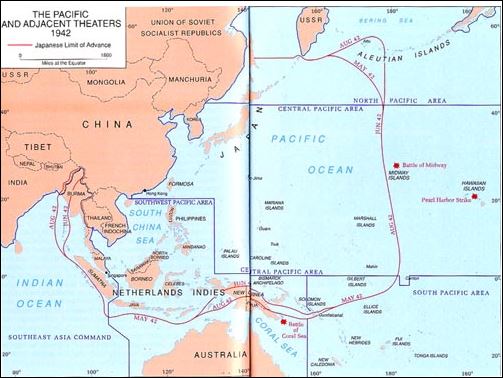 On February 5, 1943 (postmarked February 20), Howard had experienced almost a month of the wet season in Port Moresby: 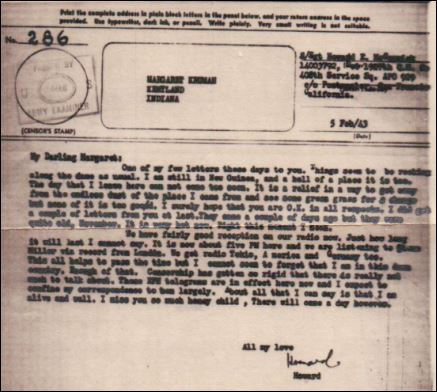 One of my few letters these days to you. Things seem to be rocking along the same as usual. I am still in New Guinea, and a hell of a place it is. The day that I leave here can not come too soon. It is a relief in a way to get away from the endless dust of the place I came from and see some green grass for a change but none of it is too good. I surely hope that you are O.K. in all respects. I did get a couple of letters from you at last. they came a couple of days ago but they were quite old, November. It is very hot here. Right this moment I mean.
We have fairly good reception on our radio now. Just how long it will last I cannot say. It is now about five PM her and we are listening to Glen Miller via record from London. We get radio Tokio, American and Germany too. This all helps to pass the time but I cannot seem to forget that I am in this damn country. Enough of that. Censorship has gotten so rigid that there is really not much to talk about. These [unclear] telegrams are in effect here now and I expect to confine my correspondence to them largely. About all that I can say is that I am alive and well. I miss you so much oney child, There will come a day however.

The following day he sent a postal telegraph: 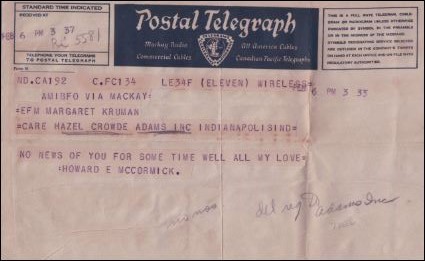 NO NEWS OF YOU FOR SOME TIME WELL ALL MY LOVE=
:HOWARD E MCCORMICK 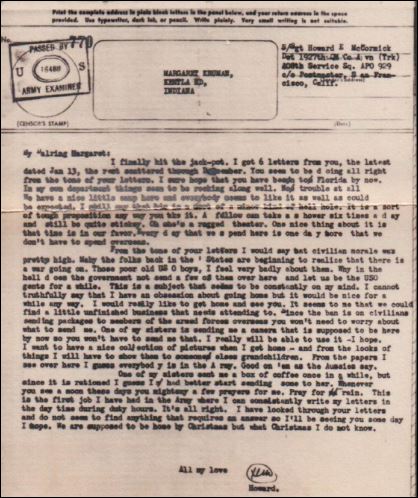 I finally hit the jack-pot. I got 6 letters from you, the latest dated January 13, the rest scattered through December. You seem to be doing all right from the tone of your letters. I sure hope that you have been to Florida by now. In my own department things seem to be rocking along well. No trouble at all. We have a nice little camp here and everybody seems to like it as well as could be expected. I still say that this is a sort of a minor kind of hell hole. It is a sort of tough proposition any way you take it. A fellow can take a shower six times a day and still be quite sticky. Oh she's a rugged theater. One nice thing about it is in our favor. Every day that we spend here is one more day that we don't have to spend overseas.
From the tone of your letters I would say that civilian morale is pretty high. Maby the folks back in the 'States are beginning to realize that there is a war going on. Those poor old USO boys, I feel very badly about them. Why in the hell does the government not send a few of them over here and let us be the USO gents for a while. This is a subject that seems to be constantly on my mind. I cannot truthfully say that I have an obsession about going home but it would be nice for a while any way. I would really like to get home and see you. It seems to me that we could find a little unfinished business that needs attending to. Since the ban is on civilians sending packages to members of the armed forces overseas you won't need to worry about what to send me. One of my sisters is sending me a camera that is supposed to be here by now so you won't have to send me that. I really will be able to use it -I hope. I want to have a nice collection of pictures when I get home - and from the looks of things I will have to show them to someone else's grandchildren. From the papers I see over here I guess everybody is in the Army. Good on 'em as the Aussies say.
One of my sisters sent me a box of coffee once in a while, but since it is rationed I guess I had better start sending some to her. Whenever you see a moon these days you might say a few prayers for me. Pray for rain. This is the first job I have had in the Army where I can consistently write my letters during duty hours. It's all right. I have looked through your letters and do not seem to find anything that requires an answer so I'll be seeing you some day I hope. We are supposed to be home by Christmas but what Christmas I do not know.

All my love
Howard

His last letter in February 1943 is dated February 27: I have in hand a couple of letters from you, 27 Dec and the other one 1 Jan/43. The one of Dec had a clipping in it that was a pretty good piece of writing, or so it seemed to me. I am so [glad?] that you got to Miami this winter. From what I read in the papers I guess that [there are?] a lot of soldiers in that place. Those pictures of them living in those [unclear] hotels seem kind of incongruous viewed from this angle. They will pay through the nose for those palmy days when they get over seas somewhere. I just hope that I get a few of those Miami boys in my outfit. Maby they will be able to forget about it. We have Ted Weems on the radio just now. How nice it is to have a good radio you will probably never fully appreciate. We just got a mess of news from the 'States, all good of course. If you believe half of what you hear, we are practically home. That would be just to [sic] bad, I don' think that I could stand it. Honey child, if your letters are any indication of the real state of affairs you spend to [sic] much time in idle thinking, I might call it. After all my love I am a pretty poor risk and it is pretty likely that I might get bumped off. To spare your own feelings I would advise you to take it easy.
You mention the troops in the outfit. You may rest assured that almost everything that we talk about it is someway connected with the Army, therefore taboo for correspondence purposes. Censorship regulations have gotten pretty rigid. They leave us almost nothing to talk about, in letters. Actually everything we do has something to do with some phase of Army life. I will be able to tell you about all those funny little things some of these days probably. If you get right down to it I suspect that the poor old civilians will get very tired of the tales that the soldiers tell. You would not appreciate the callous feeling that war engenders in people that are rather close to it too. If something happens to someone that you know about a typical remark would be "More insurance for some lucky person". The subject would then probably be dropped. This is a very sad state of affairs of course but this is no place for sentiment as on [sic] can readily see. The old excuse of I forgot to duck is no good over here.
A note about myself and I will call it a day and go to bed and get me a little spine drill. All soldiers need a good bit of this sort of thing. I am surprisingly well. I continue on my same old way, and things are not too rugged. As ever my dear you have all my love,

Ted Weems was a bandleader from the 1920's until after World War II ended.  He and his orchestra enlisted in the U.S. Merchant Marine and became the official Merchant Marine Band. 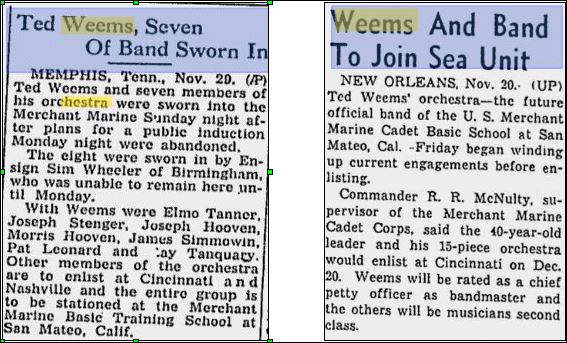