American troops first began to arrive immediately after Pearl Harbor (Brisbane, December 22, 1941). Howard arrived in Australia  on March 25,1942, a week after Gen. Douglas MacArthur arrived from the Philippines (see letter Howard to Margaret, Nov. 24, 1942). Howard was a Sergeant, which implies a promotion at some point before he was deployed overseas.  Information about the early arrivals can be found here. The WWII APO list here doesn't show an APO 505 for that time in Australia.

A description of the type of work Quartermasters did can be found here. 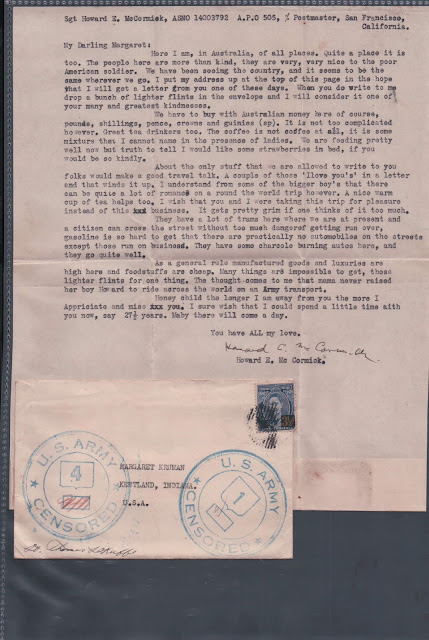 Wood and coal burning cars are discussed here.  Below is a picture of a coal gas car in Sydney during World War II: 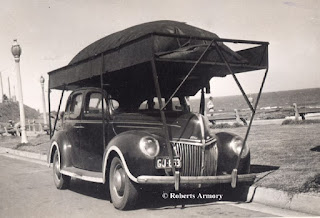 The Japanese were still a sea threat, and while there was train track from Adelaide to Alice Springs, there was a 600 mile gap in the railroad line between there and Birdum "which had to be bridged by truck or air transport." (Mayo, 1991) The railroad line from Birdum

"had small capacity, was antiquated and in poor repair, and was chiefly useful in the rainy season when the dirt road, in some places only bush trail, was washed out.

"From Brisbane to Darwin, a distance of 2,500 miles, the railroads ran only as far as Mount Isa, a small settlement that reminded some Ordnance officers of a mining town in Arizona or Nevada. There, supplies were transshipped to Birdum by Australian truck companies. Assuming cargo space was available—not always a safe assumption—a shipment normally took about ten days....
"Beginning in March regulating stations were established along the routes to Darwin, but the length of time supplies were in transit and the probability of losses en route made necessary extra supplies to fill gaps in the supply line...."