In 1942, APO 920 was Batchelor Field, Northern Territory, Australia.  A description can be found here. 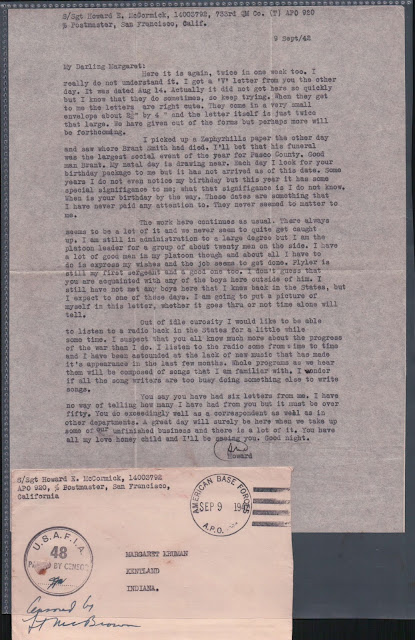 The next letter from Howard to Margaret is also dated Sept. 9, 1942, and is another V-mail.  I have transcribed the text below. 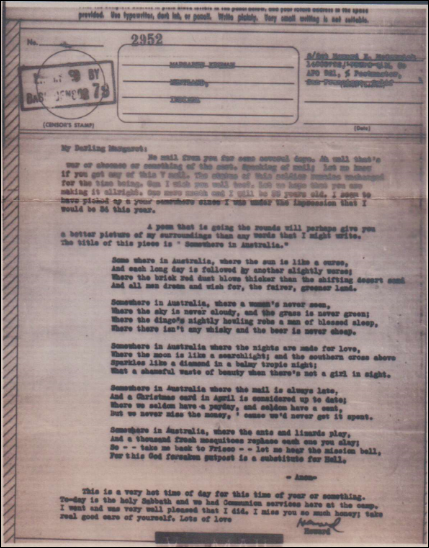 My Darling Margaret,
No mail from you for some several days.  Ah well, that's war or absence or something of the sort.  Speaking of mail: Let me know if you get any of this V mail.  The status of this soldier remains unchanged for the time being.  Can I wish you well too?  Let us hope that you are making it allright. One more month and I will be 35 years old.  I seem to have picked up a year since I was under the impression that I would be 34 this year.

A yarn that is going the rounds will perhaps give you a better picture of my surroundings than any words that I might write. The title of the piece is "Somewhere in Australia."

[indent]
Some where in Australia, where the sun is like a curse,
And each long day is followed by another slightly worse;
Where the brisk red dust blows thicker than the shifting desert sand
And all men dream, and wish for, the fairer, greener land.

Somewhere in Australia, where a woman's never seen,
Where the sky is never cloudy, and the grass is never green;
Where the dingo's nightly howling robs a man of blessed sleep,
Where there isn't any whisky and the beer is never cheap.

Somewhere in Australia where the nights are made for love,
Where the moon is like a searchlight; and the northern cross above
Sparkles like a diamond in a balmy tropic night;
What a shameful waste of beauty when there's not a girl in sight.

Somewhere in Australia where the mail is always late,
And a Christmas card in April is considered up to date;
Where we seldom have a payday, and seldom have a cent,
But we never miss the money, 'cause we'd never get it spent.

Somewhere in Australia, where the ants and lizards play,
And a thousand fresh mosquitoes replace each one you slay;
So --- take me back to Frisco --- let me hear the mission bell,
For this godforsaken outpost is a substitute for hell.
[end indent]

This is a very hot time of day for this time of year or something.  To-day is the holy Sabbath and we had Communion services here at the camp. I went and was very well pleased that I did.  I miss you so much honey; take real good care of yourself.  Lots of love, 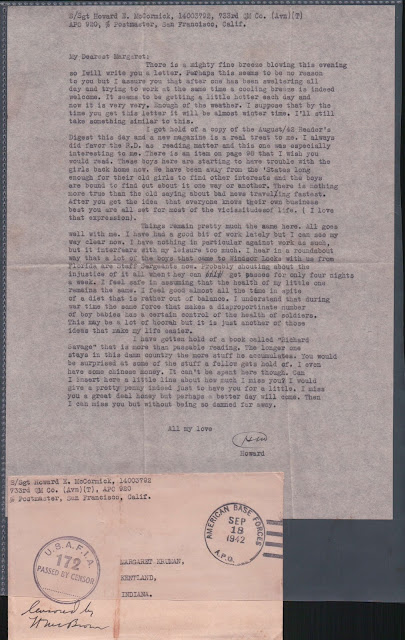 I'm not sure which article he refers to: 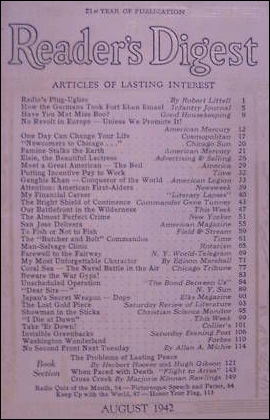 Richard Savage was an English poet.  Howard may be referring to the novel by Charles Whitehead, or either of the two biographies, one by Samuel Johnson, "Life of Savage," or S.V. Makeover's, "Richard Savage, a Mystery in Biography."  See the Wikipedia article for additional information.