My Darling Margaret,
I am terribly pressed for time but I will write you my weekly letter in spite of that. I got your two part letter dated 8 Nov but none since that. I retain my usual health and there is no perceptible change. We are still living in tents and eating out of some kits. I sure hope that you are as well as you always have been when I have seen you. Merry Christmas honey and I still need you. 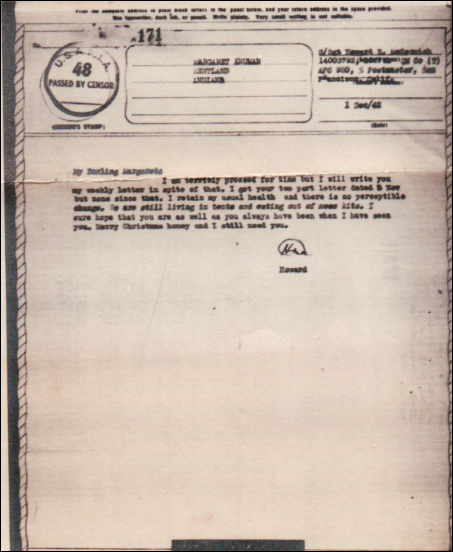 He wrote again on December 11:

Another letter to you.  I have not written to any one for a number of days on acc't of my new resolve and also I have been pretty busy. Christmas time will, as you no doubt know, soon be here. I have spent a lot of Christmas's away from home, but this one is the furthest, the wettest and the hottest of the lot. It does not feel like Christmas at all. I suppose that my being brought up on cold snowy ones has a lot to do with it.
It really rains here now days. The water comes down in sheets for a good while at a time. It does not seem to cause any particular inconvenience however and the boys usually can find their way through the rain to the mess tent for meals.
I feel safe in saying that a lot of our mail as well as yours does not reach it's [sic] appointed destination. Other people are all the time writing me that they have sent stuff to me that I have never gotten. This is I feel, a direct result of the war. The mail situation seems to be in pretty good shape as far as I am personnaly [sic] concerned these days. I guess that I get mail on as many days as I don't. Your own letters are the most welcome of the lot and they are also the most numerous.
I got a card from Stan and his wife and Bobby the other day. I was a good bit surprised, so I turned around and sent them one too. Then I threw their address away so that I could not possibly write them a letter. My correspondents now number about a dozen and I cannot make the grade any more. Honey child I miss you much too much. You are all the time talking about catching up with the work. I surely hope that we can catch up before too long. I figure that maby when I get back the war will be over and I can take a ninety day furlough, buy a new Buick, and spend about a thousand dollars. With that to start with a guy should be able to operate on a pretty good scale as our censor (Lt Brown) says. This is all for now so you still have all my love. 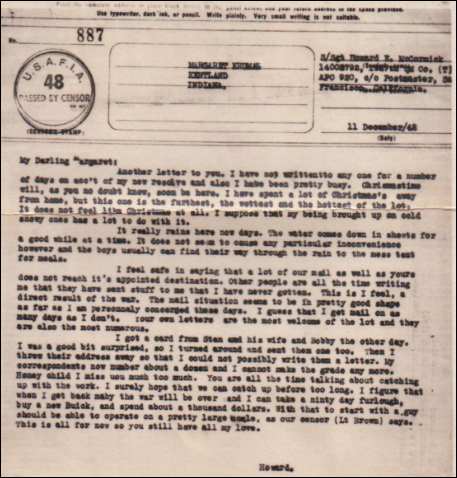 and again in an undated letter postmarked December 21 and received by Margaret on December 26, according to the penciled date on the reverse of the envelope: 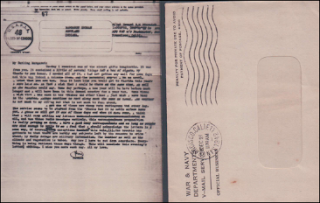 The microfilm is unclear in places, but perhaps we can interpret it later.

My Darling Margaret,
Today I received one of the nicest gifts imaginable. It was from you. It contained a little of several things and a box of cigars. My thanks to you honey. I needed all of it. I had not gotten any mail for many days and this was indeed a welcome item and the [unclear] that you are too. Does it look like you would get to Florida this year? I sure hope so, in fact I wish that I could be there at the same time, as well as the Aussies would say. Some day perhaps, a new year will be here before much longer and I have have been in this damned country for a year too. Some times I wish that I was back in the States and other times I just wish I were back in the states. Things continue to rock along much the same as usual, the weather is not much to my liking but that is not much to fuss about.
I got one of those new cheap rate radiograms the other day. The service seems to be staffed from the States but it is not in effect here yet. I guess we will get it one of these days and when it does come, I think that I will stop writing any letters at all, and use these radio messages entirely. This correspondence proposition is really getting me down. I have a good many correspondents and as long as people are mind enough to write to me I feel that I should acknowledge the letters in some way. Of course there are exceptions to this rule.(!) The trouble has gotten to be that there are hardly any subjects left by the censors to write about. My daily doings are military information. The weather as well as the climate and vegetation is taboo. Any how I have to cut down somewhere. Everything is being rationed these days though. This will conclude this evening's letter writing. I miss you more each day. All my love,
Howard

This undated telegram could be for Christmas 1942.  Unlike the letters, Margaret did not pencil in a received date on the back of telegram envelopes. 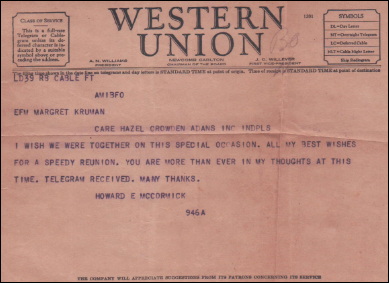 I WISH WE WERE TOGETHER ON THIS SPECIAL OCCASION.  ALL MY BEST WISHES FOR A SPEEDY REUNION. YOU ARE MORE THAN EVER IN MY THOUGHTS AT THIS TIME. TELEGRAM RECEIVED. MANY THANKS 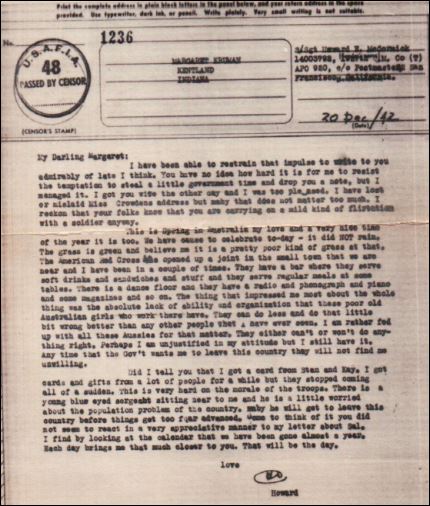 My Darling Margaret,
I have been able to restrain that impulse to write to you admirably of late I think. You have no idea how hard it is for me to resist the temptation to steal a little government time and drop you a note, but I managed it. I got you [sic] wire the other day and I was too pleased. I have lost or mislaid Miss Crowdens [sic] address but maby that does not matter too much. I reckon that your folks know that you are carrying on a mild kind of flirtation with a soldier anyway.
This is Spring in Australia and a few nice time of the year it is too. We have cause to celebrate today - it did NOT rain. The grass is green and believe me it is a pretty poor kind of grass at that. The American Red Cross has opened up a joint in the small town that we are near and I have been in a couple of times. They have a bar where they serve soft drinks and sandwiches and stuff and they serve regular meals at some tables. There is a dance floor and they have a radio and phonograph and piano and some magazines and so on. The thing that impressed me most about the whole thing was the absolute lack of ability and organization that these poor old Australian girls who work there have. They can do less and do that little bit wrong better than any other people that I have ever seen. I am rather fed up with all these Aussies for that matter. They either can't or won't do anything right. Perhaps I am unjustified in my attitude but I still have it. Any time that the Gov't wants me to leave this country they will not find me unwilling.
Did I tell you that I got a card from Stan and Kay? I got cards and gifts from a lot of people for a while but they stopped coming all of a sudden. This is very hard on the morale of the troops. There is a young blue eyed sergeant sitting near me and he is a little worried about the population problem of the country. maby he will get to leave this country before things get too far advanced. Come to think of it you did not seem to react in a very appreciative manner to my letter about Sal. I find by looking at the calendar that we have been gone almost a year. Each day brings me that much closer to you. That will be the day.
love,