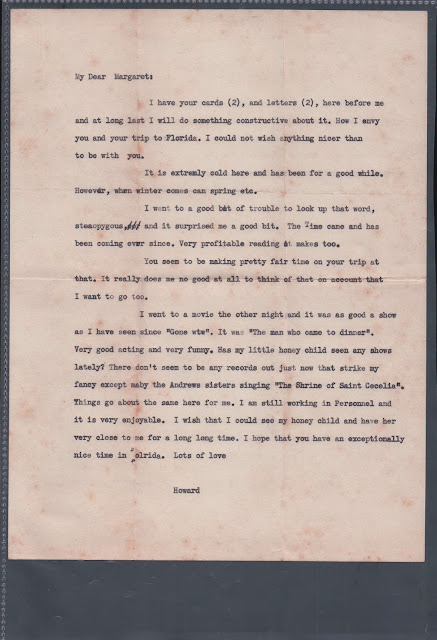 So Howard enlisted in the Army in 1940 and in January 1942 is at an Air Base at Windsor Locks, Connecticut, Bradley Field, now Bradley International Airport and a dual use military facility with the U.S. Air Force.  He is "still working in Personnel," which "is very enjoyable."  This is after Pearl Harbor, and within a year after Connecticut turned over the land to the U.S. Army.  I fly in and out of Bradley at least once a year to visit friends who live in western Massachusetts.

Margaret lived in Kentland at this point, with her first husband, J.W. "Bud" Kruman, but has taken a trip to Florida.  It is clear that Howard and Margaret have already been corresponding and possibly more:

When I was growing up, Howard kept a steady stream of magazines, including Time, Newsweek, Life, the New Yorker, the Atlantic, Harper's, not always all at the same time.

I love that he calls her "my little honey child."